skip to main | skip to sidebar

a merry christmas to you all...
Posted by italian fashion holiday. at 2:46 PM 1 comment:

we walked off to look for america.

i'm off for a little getaway before the actual holidays.
may it be a nice week for you all.
Posted by italian fashion holiday. at 2:27 AM 1 comment:

we didn't give a damn.

swimwear line, zimmermann has just launched their line of lingerie. the items may be pricey, but the 100% silk pieces are as equally stunning.
Posted by italian fashion holiday. at 1:26 AM 1 comment:

australia's youth group, "forever young" is a cover of, alphaville. i have preferred the version that 'youth group' has to offer ever since hearing it on an episode of, the oc. and now, i love it even more after discovering the "music video" which is really just footage from a 1975 skateboarding championship. i'm not sure what my fascination is with home movies and excellent music playing in the background, such as the last "song of the week" post. i just find it all so nostalgic, although none of the "home movies" pertain to me. the footage from the skateboarding championship is very, lords of dogtown...and that is just incredible.
Posted by italian fashion holiday. at 7:09 PM 1 comment:

Labels: song of the week., television

the december 08/january 09 issue of uk harper's bazaar features an ethereal editorial. the photos automatically exude beauty because of the natural setting that is the backdrop. the delicate pieces almost seem untouchable as they relish in the breeze that seems to keep them afloat. as of recent, it seems that i have become more fond of the uk edition of harper's bazaar rather than the us edition; the following is an obvious reason as to why.

"iconoclasts" is a genius original series that features creative innovators who meet and discuss their passions and love for the career in which they acquire. i'd always wanted to experience the series for myself, since i have heard great reviews, but it just seemed to slip my mind everytime a new pair of iconoclasts were featured. i was surprised and glad to hear that robert redford is an executive producer. recently, stella mccartney and ed ruscha were featured in the riveting show.

fashion designer, stella mccartney and artist, ed ruscha exchanged ideas of fashion and art and how the two meet at a certain point. many know stella mccartney as a visionary of fine clothing, while maintaining an organic and fur-free fashion line. not to mention that she's the off-spring of a famous beatle. although, i hadn't a clue of who ed ruscha was before watching iconoclasts, i was able to appreciate him as the creative pop artist he is. ruscha was apart of the pop art movement in the 1960's alongside andy warhol. ruscha's sarcastic sense of humor shows through most of his pieces.

throughout the hour-long episode i was most inspired by the possible collaboration both mccartney and ruscha had discussed. stella mccartney pitched an idea to ed ruscha for clothing she would designed that featured his own art. to see each in their own environment and explaining their own line of work is just as incredible as seeing them outside of their elements, learning the creative process of the other. after seeing the ideas and color keys that both mccartney and ruscha had in mind, there is no doubt that they could make a beautiful collaboration.
Posted by italian fashion holiday. at 9:48 PM 1 comment:

italian fashion holiday.
"style is knowing who you are, what you want to say, and not giving a damn." -Gore Vidal 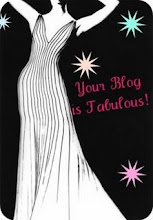